With 2016 drawing to a close in just several hours, it’s time, once again, for the annual TechnicalCafe.com Favorite App list, showcasing some of my favorite apps that I’ve used over the past year, and explaining why they were chosen.

The apps listed below span a variety of categories and uses, and while not all of them were created or released in 2016, they were some of the apps that I frequently during the course of the last year or so.

In no particular order, here is the TechnicalCafe favorite apps list for 2016: 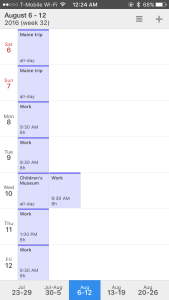 Calendars 5, by Readdle, is a calendar app that can be synced with both iOS and Google Calendar and can also be used for managing your tasks with the app’s built in task manager (that also syncs with iOS Reminders and Google Tasks).

One of the great features about Calendars 5 is the natural language processing that is built into the app, which makes it easy to enter an appointment into one’s calendar. For example, one can add an event to their calendar by entering something like ” Wednesday 9:30 AM – 10:30 Dentist Appointment”, which will create an event for the next Wednesday from 9:30 AM – 10:30 AM, making it easy to enter appointments and events in one’s calendar.

Calendars 5 also enables users to view events and tasks in several views, including “List”, “Day”, “Week”, and “Month” views, with the “Month” view being particularly nice, in my opinion, as you can see what you have going on for the month, like you would be able to with a traditional desk or wall calendar.

Google Calendar’s official iOS app, which launched last year, is another great app for viewing and managing your Google Calendar.

Users can also use the Google Calendar app to add goals and reminders to their schedules, which can make it easier to try and get things done, while also keeping all of the aspects of one’s schedule in the same place.

Alien Blue is an app for accessing Reddit, but has since been discontinued following the release of the new official Reddit app, available for iOS and Android.

Despite the fact that there’s a new official app for browing Reddit, I still find myself using Alien Blue quite frequently, given that I’m used to using the app and am familiar with many of its features.

Evernote is an app that enables users to manage notes, to-do

lists, and more, with everything being synced across multiple devices, making it accessible both at your computer and on the go.

Users can collaborate on notes with other users, and can even share notes publicly, should they choose to do so. There’s also the option to chat with those who are working on notes with you, making it easy to dicuss and understand your notes and other items that are being worked on in collaboration with others.

Evernote also offers a paid version, which includes a variety of
upgrades, including the ability to use Evernote on more than two devices, increased upload limits, offline access to one’s notes, and more.

Personally, I use the free version of Evernote and am pretty happy with the service. In fact, Evernote has pretty much replaced the native “Notes” app on my iPhone, as I enjoy being able to take and sync notes across my devices, and also enjoy the desktop access to my notes (via the Evernote website or desktop application), in addition to being able to access my notes using the app.

Snapchat, by Snap, Inc.,  is a free app that enables users to send photo, video, and text messages to one another, with the caveat that the messages disappear once they’ve been opened. With a variety of filters that can be used to enhance one’s photos and videos, Snapchat offers users a fun way to communicate, beyond that of what traditional text messaging provides.

Personally, I use Snapchat almost daily and think it’s a lot of fun to be able to send messages back and forth with friends and family. It can be quite a bit of fun to experiment with the variety of filters and effects that are available within the app, and it can also be just as fun to see what my friends and family members come up with while using them.

OneDrive, by Microsoft, is a free cloud-based storage solution that enables users to create and store documents in the cloud. In addition, users can upload photos, videos, and other files and documents and keep them synced across all of their devices.

The free plan offers users 5 GB of storage, with paid storage plans available, should users desire additional storage space. One of the best features about OneDrive is that users can set it to automatically back up photos from their phone’s camera rolls to the service, so that should something happen to their phone, their photos and videos will be stored in the cloud and can be downloaded and viewed again.

I’ve been using OneDrive for the past several years and have found it to be a great place to store photos and videos, and have recently upgraded to a paid plan so that I can continue to backup and store my ever-growing photo and video library online.

Mint, by Intuit, is a free service that enables users to keep track of their money and finances, including spending, income, budgets, and more.

With Mint, users can add multiple accounts, including checking, savings, credit cards, etc. and see how their money has been used and where it has been spent over various time periods, thanks to a variety of helpful metrics and graphs.

Users can also create and view budgets, with default budgets being provided, in order to better keep track of spending within certain categories. 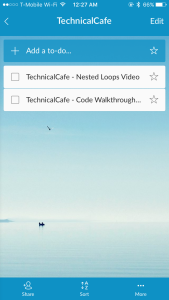 Wunderlist, a to-do and reminders app that was acquired by Microsoft last year, is on the list again, as it enables users to keep track of tasks and reminders across multiple devices, including desktop, mobile, tablet, and even on wearables, like the Apple Watch.

Like with the native iOS notes app, Wunderlist enables users the option to have multiple task lists and also enables users to set due dates, add notes, and even have nested tasks, if desired.

Wunderlist requires that users sign up for a free account, which can be used to sign into the service and view tasks on multiple devices. Users can share their lists with others, and can also invite others to view and modify their lists, as well. 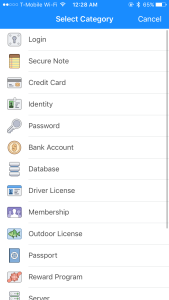 Given the increase in the amount of usernames and passwords that we must remember today, 1Password, by Agile Bits, is a great app to have, as it can help users to safely and securely store their passwords all in one place.

Protected by encryption that can only be unlocked by using a master password, all of a user’s passwords can be safely stored in 1Password, leaving the user to only have to remember their master password, which unlocks the app. If you’re thinking “what will happen if I lose my phone?”, 1Password also offers users the option to back up their credentials to one of several cloud-based services (iCloud, Dropbox, etc.), with the backup also being encrypted so that there is no need for anyone to worry about their passwords being seen by prying eyes.

Users can also store other data within 1Password, including secure notes and card numbers, among a variety of others. There’s also a paid pro version of 1Password that offers additional features, should users desire them.

I’ve been using 1Password for a while now, and find myself using it pretty frequently, especially when I’m trying to log into a service that I don’t regularly use. Given that the app is so helpful for remembering passwords, I purchased the pro version (via an in-app purchase), and am quite happy with the app overall. 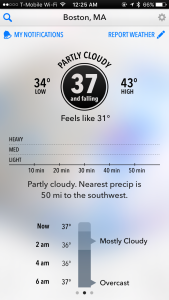 Dark Sky is a weather app that offers a variety of useful information and features, above and beyond those offered by most standard weather apps.

While Dark Sky has a pretty hefty price tag, as far as apps go, I think the purchase is definitely worth it if you’re looking for a robust weather app with a variety of useful and interesting features.

We hope everyone has a happy and healthy New Year and would like to thank everyone for visiting the TechnicalCafe.com blog and the TechnicalCafe YouTube channel and for taking the time to read, view, and comment on our content! See you in 2017!

This site uses Akismet to reduce spam. Learn how your comment data is processed.